How does the suspensory ligament become damaged? 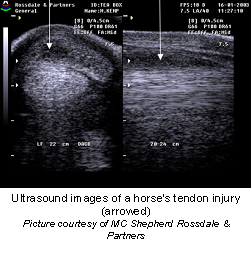 The ligament and its branches are strong but only slightly elastic.  Excessive stress can occur to the ligament when a horse lands after a jump or when it travels at fast speeds.  Essentially, an over-stretching injury can occur resulting in damage to the ligament.  The damage may be only slight tearing of fibers at the level of their 'origin' (upper cannon bone) or their 'insertion' (sesamoid bones).  The damage is usually accumulative over a period of time and may be considered a type of 'repetitive strain injury'.  Alternatively a 'core lesion' i.e., 'hole' can be seen (with ultrasound scan examination) in the centre of the body of the ligament or in a branch of the ligament where a number of fibers have ruptured.  These injuries usually have a more sudden onset.  Complete rupture may occur, in extreme cases, but this is fortunately uncommon.

How can I recognize that my horse has damaged his suspensory ligament?

Clinical signs vary with the site of the injury and the severity of the damage.  When the origin of the suspensory ligament is damaged (known as 'proximal suspensory desmitis'), the condition is often 'bilateral' i.e., in both fore or both hindlimbs.  There is usually no heat or swelling but there may be some pain when the area just below the back of the carpus ('knee') or hock is pressed firmly with the leg in a flexed position.  In these horses the lameness may be subtle and (especially in the hindlimb) often develops gradually and goes undiagnosed for some time.  In the forelimbs the lameness may be inconsistent and somewhat variable.  When the hindlimbs are affected, the lameness is usually more consistent.  The lameness usually becomes worse with exercise, may improve with rest and is usually more obvious when the horse is exercised on a soft surface.  In many cases the horse may show signs of poor performance but no overt lameness.

With injury to the branches, there is usually thickening of the affected region.  Warmth and tenderness may or may not be present.  If the ligament is ruptured, the fetlock will 'sink' towards the ground, fully or partly, depending on the completeness of the rupture.  Suspensory ligament rupture is most commonly seen in older brood mares and occurs due to degeneration of the ligament rather than related to an athletic injury.

How are suspensory ligament injuries diagnosed?

An initial diagnosis is based on the results of history, clinical signs, i.e., heat, swelling and lameness, nerve blocks and radiography (x-rays), the latter to rule out bony abnormalities.  Ultrasound examinations are essential to definitively diagnose and quantify the degree of damage to the ligament.

What treatment options are available and can my horse make a full recovery?

Again this depends on the site and severity of the damage and how quickly the condition is diagnosed.

Proximal Suspensory Desmitis - In the forelimbs the prognosis is good.  Often a course of 'Extracorporeal Shockwave Therapy' and a period of rehabilitation is all that is necessary.  Occasionally this will be done in conjunction with a steroid injection into the region of the origin of the ligament.  In the hindlimbs the prognosis for conservative treatment is less good as the anatomy of the hindlimb is slightly different to that in the forelimb which complicates the healing process.  Shockwave therapy and medication of the site of injury may be successful depending on the degree and duration of lameness.  If this fails a surgical procedure called a 'Plantar Metatarsal Neurectomy and Fasciotomy' can be performed.  This is a very common procedure and has a high success rate.

Suspensory ligament body and branch injuries:  Minor damage to suspensory body and branches will usually repair given sufficient time.  This usually means box rest initially with rehabilitation such as cold hosing to reduce inflammation.  In acute injuries where a core lesion is present there are substances that can be injected directly into the damaged area of the ligament under ultrasound guidance.  These are aimed at improving the structure of the healing tissue and vary in efficacy and popularity.  Your veterinarian will advise you if this form of treatment may be appropriate for your horse.  In more chronic cases, shockwave therapy is commonly used, followed by a period of controlled exercise, the duration of which depends upon the initial amount of damage.  Lameness associated with more severe branch injuries may persist due to the amount of 'fibrosis', or 'scar tissue', that forms around the branch itself.  In these cases a surgical procedure called 'suspensory branch splitting' may be required. In cases where a fragment of sesamoid bone has broken away with the damaged ligament (avulsion fracture), the prognosis is poorer.

The prognosis is grave for cases of complete ligament rupture even with several months rest and euthanasia may be required on humane grounds.

What can be done to follow the repair process?

With body or branch injuries, sequential ultrasound scan examinations are the most useful way to monitor the healing process.  In the case of proximal suspensory desmitis, ultrasound changes often lag behind the improving clinical picture and the degree of lameness is often used to assess how well the horse is responding.  Depending on the degree of damage, follow-up scans should be performed at one and three months and certainly before any significant increase in exercise level.  Any increase in exercise should be made gradually to avoid over stretching the incompletely healed tissues.

Is the injury likely to recur?

Ligaments are made up of fibers that run along their length in a regular, well-organized manner.  When the fibers are damaged some heal in an irregular, criss-cross pattern rather than lengthways.  Also, the repaired tissue is different in structure and mechanical properties than the original, healthy ligament tissue.  Therefore the ligament will always be compromised in structure and function rendering it susceptible to re-injury.  However, if the horse is given sufficient time for repair and a careful and sensible approach is made to re-introduction to exercise, re-injury is less likely to occur.

View All
Ready to make an appointment? Contact us today! Book Now

We are temporarily closed while construction is underway to expand our clinic. While we are closed, we are seeing patients at our sister clinic, Limestone Valley Animal Hospital:

Thank you for your understanding,

Be sure to check out our sister clinic for pets in the rural and acreage communities north of Burlington.